Heather's 3rd album, "Writing Fiction", will release in 2023, and features a beautiful collection of curated songs that captures her vocal strength, and showcases her maturity as a songwriter. Check out a sample track of "I Almost" here. 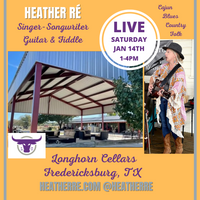 It's high time to come to the Hill Country and join me to celebrate the holiday weekend! I'll be playing on guitar and fiddle, and singing some of my fav tunes while drinking some of my fav Texas wine... y'all come! 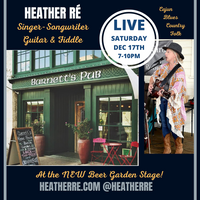 Join me at the NEW Beer Garden as I play originals and covers on guitar and fiddle! 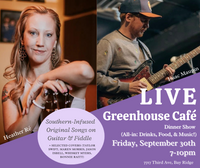 It's been a long 7 years since my 1st album release, and I'm excited to be back at the Greenhouse where it all began! Join me & Isaac Maupin on lead, as I play my original songs on guitar & fiddle, and some of my favorite covers (Taylor Swift, Maren Morris, Jason Isbell, Whiskey Myers, Bonnie Raitt). It's a dinner show! All-in: Drinks, Food & Music! Contact Greenhouse for more details: (718) 833-8200 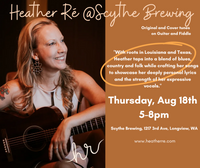 Join me for an evening of acoustic music! I'll be playing my new songs, and some old favorites, on guitar and fiddle. 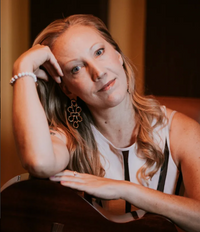 Join me on the patio as I play some originals and covers on guitar and fiddle! 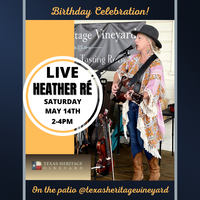 It's my birthday! Come celebrate with me on the patio at Texas Heritage Vineyard! I'll be playing my favorite originals and covers on guitar & fiddle... you just never know who might show up! 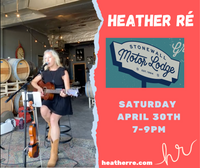 Associated with the Cactus Getaway Author Event, I'll be playing tunes on guitar & fiddle in the courtyard underneath the beautiful live oak trees at this iconic motor lodge! Check out the event here: https://heatherreneemay.com/getaway 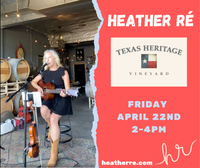 Grab a bottle, fill up your glass, and join me on the patio as I sing some of my new original tunes, favorite covers, and serenade you on guitar and fiddle! 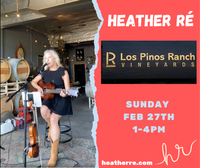 Playing tunes on guitar and fiddle for the LPRV Wine Club Pickup Party (Not a member? Join today!) 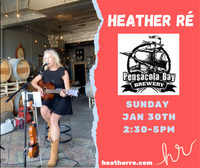 Join me for an acoustic medley of my own tunes and some of my favorite covers on guitar and fiddle! 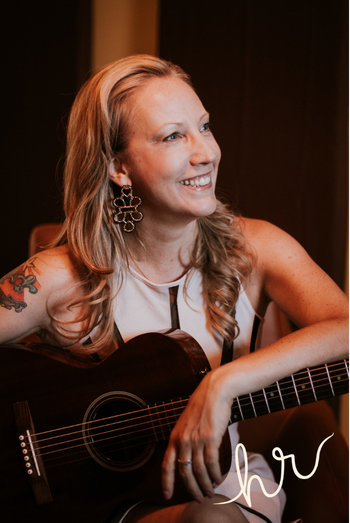 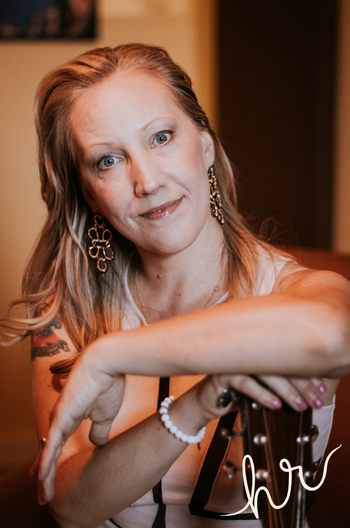 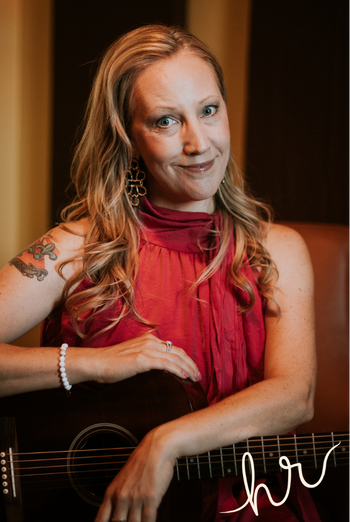 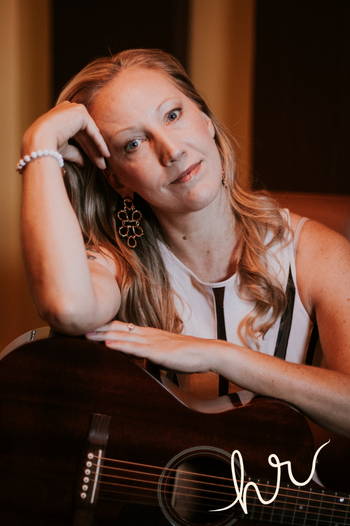 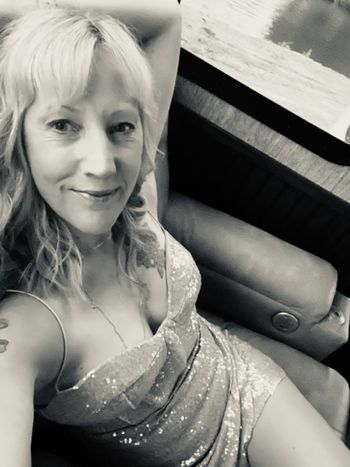 Heather has toured all over the country performing solo, and with distinguished artists including; Michael Doucet avec BeauSoleil, Rich DelGrosso, David Bromberg and Richard Thompson.  With roots in Louisiana and Texas, Heather taps into a blend of blues, country and folk while crafting her songs to showcase her deeply personal lyrics and the strength of her expressive vocals.

Heather began singing professionally at 17 with the rock band Filter, from Denver, CO. A few years later, she sang jazz with the John Pike Trio making Julie London's "Cry Me A River", and Edye Gormé's "I Wanna Be Around" her signature songs.  In 2010, she turned to songwriting and studied guitar under Mike Riddle (City Kids/Prodigal Child) in Brooklyn.  She performed at street festivals and venues in NYC and across the U.S, while honing her unique style.  Heather attended Augusta Heritage Blues Week and studied guitar from Elijah Wald, Joan Fenton, and John Del Toro Richardson, and vocals from Gaye Adegbalola, showcasing her vocal strength on Katie Webster's "Pussycat Moan" with Arthur Migliazza.  Digging further into her roots, she began learning fiddle and attended Dewey Balfa Cajun and Creole Heritage Week in Louisiana, studying under Al Berard, Mitch Reed, and Ed Poulard. Heather left New York, moving to Jamaica Plain, MA, and performed regularly with Isaac Maupin and the Tom Towler Band.  She recorded her first EP Darlin' Stay (2015) with Michael Doucet guesting on tracks and they sang their signature harmonies on "Dans Le Grand Brouillard".  In 2015, Heather married Michael, moving to Lafayette, LA and learned Cajun fiddle and guitar from the icon while touring and singing with his band BeauSoleil avec Michael Doucet. Highlights included; performing at New Orleans Jazz & Heritage Festival, opening for Richard Thompson at the Manship (Baton Rouge) singing "Dimming of the Day" with the revered songwriter, and sharing the stage with David Bromberg performing her original song "I Still Do".  The Doucets performed as a duet at Pensacola Singer/Songwriter Festival in 2016 & 2017, showcased their harmonies on Michael's song "Dis-moi Pas" (eTown), and collaborated on Psycho Swamp. As the partnership was ending, Heather recorded her 2nd album, "This Road We're On" at Lullaby Sound Design studio in Lafayette, with Mitch Reed, Danny Devillier, and Jason Harrington (2018).

During the pandemic, she saw the opportunity to take to the road full-time in her RV, and continues to travel all over the US with her rescue pup, Dotty.  The following years of wanderlust and personal discovery allowed Heather to focus on fine-tuning her craft of songwriting and performing.  She recently recorded 13 tracks for her 3rd album, "Writing Fiction", which will debut in 2023. The album is a beautiful collection of Southern-infused songs that truly capture the strength of her vocals, her songwriting style, and her coming home within herself.

Coming 2023! This 3rd album is a beautiful, curated, collection of Southern-infused original songs that capture the strength of Heather's vocals, her maturity as a songwriter, and her wisdom traveling the country and finding home within herself.

On her debut album (2015) she plays guitar and fiddle, singing all original songs, except for "Dans Le Grand Brouillard" (Written by Michael Doucet). Her music has the deep strength of Bonnie Raitt, the silky smoothness of Norah Jones, and the sassy no-nonsense story-telling of Michelle Shocked. Recorded in Boston, MA.

This Road We're On

Her follow up release (2018) further explores the delicate intricacies of human relationships. The focus is on her beautifully crafted melodies and lyrics, with minimal accompaniment by Mitch Reed on cello and bass, Danny Devillier on Percussion, and Jason Harrington on Harmonica and back up vocals. Recorded in Lafayette during a rainstorm, the

Her follow up release (2018) further explores the delicate intricacies of human relationships. The focus is on her beautifully crafted melodies and lyrics, with minimal accompaniment by Mitch Reed on cello and bass, Danny Devillier on Percussion, and Jason Harrington on Harmonica and back up vocals. Recorded in Lafayette during a rainstorm, the album is a deeper dive into her authentic style and reflects her openly vulnerable feelings and outlook on life. 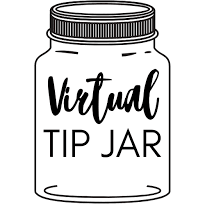 Prefer to use Paypal? paypal.me/heatherreneemay Venmo? @Heather-Renee-May Thank you for your support!

Enter the amount you wish to donate